Before I begin, just a reminder that if you are following me, you’ll get an email each time I post a blog. When you do, tap on the heading of the email, this will take you to my blog site. From there you’ll be able to tap on the photos and see them in full screen. Assuming you want to of course!!

First things first, we had a 2 hour journey from Dos Hermanas to Ronda and (very happy face) no engine warning light and I’m pretty positive now that the Van is running more easily. It’s not something I’ve noticed before but if it had been struggling for some time before it reached warning light status, this isn’t all that surprising.  I for one, am so relieved!

So back to Ronda. What a fantastic drive here through the mountains of south Seville and into Malaga provinces. Amazing views, beautiful deep valleys and majestic mountains and green, green, green.

The campsite is about a 25 minute walk to the old city and as soon as we got settled, we took a walk into town. For a small city, there is quite a lot to do and see, the weather was sunny and warm so we wandered around just soaking up the scenery.

Ronda is famous for the El Tajo gorge which is over 100 metres deep and divides the city into two. It is a truly amazing site.

There are three bridges that span the gorge, the Puente Nuevo (new bridge), the Puente Romano, the Roman bridge and the Puente Viejo, the old bridge or the Arab bridge.

One of the attractions of Ronda for me (apart from the gorge) is its Moorish inheritance. I very much wanted to visit the site of old Arab baths for example and was sad to find that they were closed because of damage suffered during the recent heavy rains. We could see the destruction and were appalled at how high the water had got and the general damage it had caused. 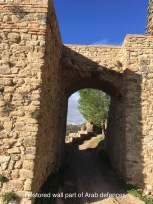 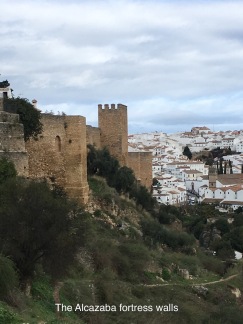 Alongside the gorge are the very pretty La Cuenca Gardens which has 61 varieties and nearly 1000 rose bushes, some of which were still in flower. It must be a fabulous sight in early summer.

We also visited the Joaquín Peinado Museum, more I confess, because it is housed in a building/palace where the heirs to Moctezuma once lived. I had hoped to see a little  trace of their existence there but sadly all that is left is their coat of arms over the entrance. The building does have a really fantastic 16th century Muedjar timber roof and some cubist inspired pictures by the Spanish Artist Joaquín Peinado. 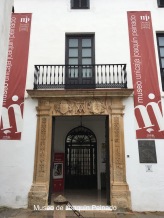 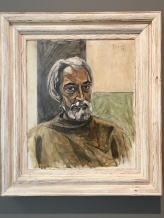 Of the many examples of churches in Ronda, we picked the Iglesia Santa María Mayor. It sits on the site of a Mosque though sadly most of the architecture has been destroyed. You can also climb up to the roofline and get some wonderful views of the city. 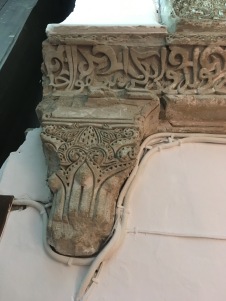 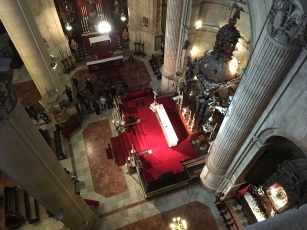 And views from the roof… 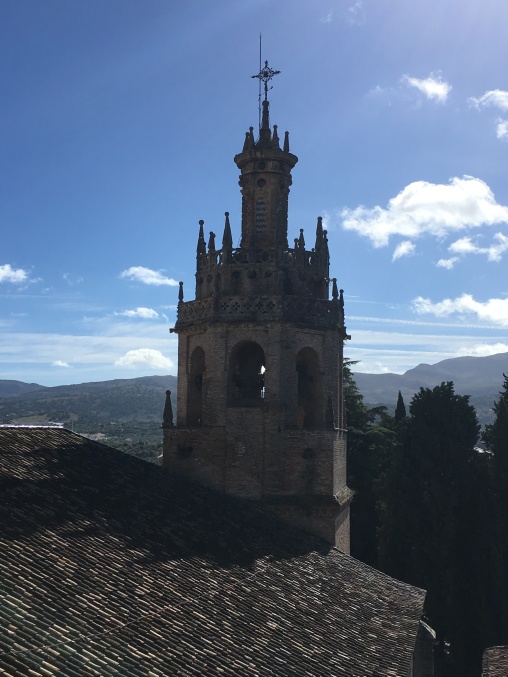 I didn’t visit the bull ring in spite of its being mentioned by Ernest Hemingway who stayed in Ronda and, as a bull fight affectionado, recommended seeing a bull fight here. Not for me my friends, a horrific spectacle IMHO. This is the best picture you’ll get from me, a majestic bull statue…

We also made another feline friend, BB2……

We stayed 5 days/6 nights in Ronda and had a lovely time. Today as I write the temperature outside is 22°C on the 11th November. Pretty good I think….

We’re planning to go to Cordóba next for only a couple of days. We’ll be staying in a car park/Aire which is fairly central but basic. Unfortunately the nearest campsites are quite a way out of town and very expensive with poor to average reviews. So we’re going for the cheap option ☺️.

This is a text widget. The Text Widget allows you to add text or HTML to your sidebar. You can use a text widget to display text, links, images, HTML, or a combination of these. Edit them in the Widget section of the Customizer.
%d bloggers like this: